Larimar All in One Necklace 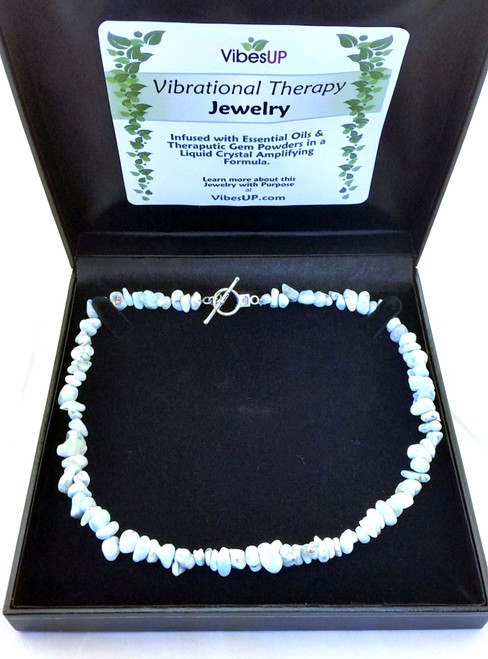 Larimar All in One Necklace

Infused with I Want It All formula of All 19 VibesUP themes of Allergy Relief, Courage, Confidence and Fear Releasing, Metabolism boost, Passion- Libido Enhancement Formula, Love, Forever Young, Relief From Stress (Peace and Calm), Abundance and Prosperity, Health and Wellness, Energy and Motivation, Joy and Inspiration, Will Power, Protection from Negativity, Relief from Pain, Clarity, Balance Relief from Depression

Larimar - I was talking with a Jeweler and he told me Larimar is the most popular stone of our times. This made me curious as to why..what are the qualities that so many people would be naturally drawn to wear it.

Here is what I found.

Larimar is an extremely rare gemstone that has only been found in one location: a mountainous, relatively inaccessible region of the Dominican Republic overlooking the Caribbean Sea. This gemstone first surfaced in 1974, although the inhabitants of the region and their ancestors have long been aware of the stone.

Larimar is a new and extremely welcome member of the family of healing stones. Larimar is finely tuned to the human body, especially the 5th Energy Center (Chakra; Vishuda), situated in the throat area of the body. This area is also associated with the communication. The Energy Center (5th Chakra) holds the thymus gland, which regulates the immune system, and the thyroid gland near the trachea, which secretes growth-regulating hormones.

Larimar may be supportive in speech and communication skills, the healing process (thymus), and increases the possibility of regulating thyroid gland malfunction.

Larimar supports dissolving different kinds of energy blockages that cause physical problems or mental diseases. Larimar enables the flow of energy within a person and helps promote an open mind to changes and improvement. It also softens the stress and tension that problems bring.

This stone with a soft blue color supports us in the changes to which we are constantly exposed. It is no coincidence that Larimar has appeared at a time when the world is going through important transformations. These days especially, there is a need for guidance to lead us on our way with positive energy. The blue gemstone softens, enlightens and supports the healing process of the physical, emotional-mental and spiritual bodies.

Because of its extraordinary blue appearance (also found as blue-white and blue-green, depending on quality), this gemstone is associated with the heavens, the seas, and planet earth as seen from space. The power of these natural elements is contained within this semi-precious stone. Larimar bears the strength of the blue sky with its white clouds and the depth and clarity of the fantastically blue Caribbean.

It combines our mind and thoughts (elements of air energy) with our hearts and emotions (elements of water energy), gathering them into a harmonious whole. Also, Larimar helps us to view events from a different, more positive perspective.

Larimar is also called the Atlantis Stone, because a Spiritual Master who once lived in Trinidad & Tobago and who founded many Yoga Centers in the Caribbean, United States, Australia, and South America claimed some islands in the Caribbean, particularly the Dominican Republic, was, in fact, part of the sunken continent Atlantis.

Edgar Cayce, “The Sleeping Prophet” (1877 - 1945), indicated that part of Atlantis could be found in the Caribbean. He also indicated that one would find a blue stone with extraordinary healing attributes, a description that corresponds to Larimar. Other sources in Europe have ratified the widespread belief that the island where Haiti and the Dominican Republic are situated, was indeed part of the Atlantis continent.

It is well known that the Larimar gemstone, the blue beauty of the Caribbean, exists only in one region in the world, close to Baoruco, province of Barahona, Dominican Republic and hence the popularization of the name Atlantis Stone.

In Europe in the 1980s, Larimar was commonly known as the Atlantis Stone and even today, customers at mineral and gem show as well as Metaphysical shows and events, often refer to and seek the Atlantis Stone, rather than Larimar. Many believe that the colors of Larimar also represent a trace to Atlantis and there are books about Atlantis that mention Larimar as an important tool for healing work.

Mother Earth gave this special gemstone to human beings in the seventies, and the appearance of Larimar coincides with the emergence of information about Atlantis. Sensitive persons can feel and see the information about Atlantis carried by Larimar. Today, there are thousands of people - naturalists and those who practice alternative and holistic healing methods - who use Larimar to assist and reinforce the healing process.